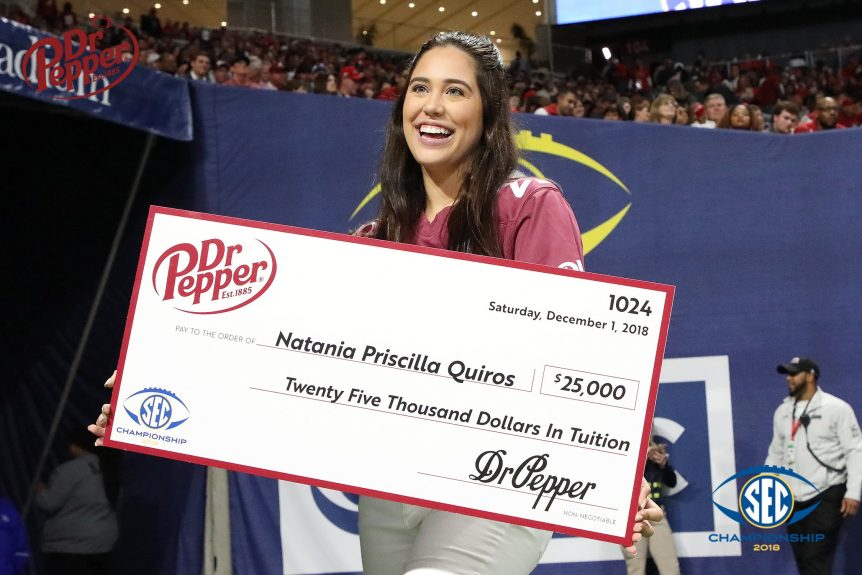 About Me: I graduated from Our Lady of Lourdes Academy in 2014 and joined the FIU Honors College as a freshman that Fall semester. Throughout my time at FIU, I was a member of the Honors College, a sister of Phi Sigma Sigma, a Student Ambassador, and a participant in both the Academy of Leaders Program and Panther Camp. I consider myself to be a true Panther and have great pride for the university. I graduated a year earlier than anticipated with a Bachelor’s in Early Childhood Education Development and a minor in Psychology through the Honors College. Although I was active on campus, it was challenging because through it I worked two jobs and was experiencing a lot of personal turmoil in my life.

The Scholarship Details: The Dr. Pepper Tuition Giveaway Scholarship is an incredible opportunity for students selected as finalists to compete for a $100,000 scholarship. Students are first asked to submit a sixty second video on an educational goal, its impact on the community, and the impact on your life and your community. That’s it! It’s competitive because you are explaining something you have accomplished or plan to accomplish and your reasoning in only one minute. Out of numerous applications, twenty videos are chosen. These twenty finalists will be divided into five groups of four and each awarded with a scholarship of $2500 as well as an all expenses paid trip to a college football conference championship game to battle it out on the field during half time! There are thirty seconds to toss as many of thirty footballs into a Dr. Pepper inflatable can placed five yards away. Third and fourth places receive their consolation prize of $2,500, second place receives $25,000, and first place receives $100,000! These funds can be used for tuition, fees, books, supplies, and on campus expenses over a period of four years.

How I Got Involved: When I graduated, I intended to pursue a Master’s in Speech-Language Pathology. At the time, I was experiencing family problems due to a parent’s mental illness which resulted in me having to leave my home. More than anything, it was important to me to be in safe environment where I could pursue my goals. I knew I would have to pay for my prerequisite courses out of pocket, which became an unrealistic goal since I was already working two jobs just to support my basic costs. At this point I questioned whether a career as an SLP was my true calling. My faith got me through a difficult year, and I decided to work as a teacher in a Catholic school. This would give me an opportunity to further research career choices and still work with children, which I am very passionate about helping. I soon realized I doubted myself often and lacked self-esteem despite my accomplishments because of my emotionally-draining home that appeared beautiful on the outside to everyone else. I did a career test and matched with nursing, which I found interesting because I always dismissed the medical field in search of a career geared towards a more creative individual. I began searching for scholarships available and stumbled upon the Dr. Pepper Tuition Giveaway less than five days from the deadline. I quickly made a video and submitted what I felt represented myself and my true passion. I decided I wanted to pursue a second bachelor’s degree, this time in nursing, and attend graduate school to become a psychiatric nurse practioner with an additional certificate in pediatric mental health. Helping children feel safe and comfortable in a situation like I was in is crucial to early development and later life skills. Children need their dreams to be reinforced and understand that mental illness does not define one, whether they themselves have a mental illness or are exposed to a family member with it. With this opportunity, I can go back to school and positively affect the lives of many children during a time that can be very scary for them.

On November 29, I flew out to Atlanta with a guest of my choice to meet three other contestants. We participated in a preliminary, and I actually won and went on to compete during half time of the Alabama vs. Georgia game on Saturday (SEC Championship)! The event itself was the Dr. Pepper Tuition Giveaway at the SEC Championship. I got runner up there so I received a $25,000 scholarship from Dr. Pepper! So if accepted next year, I will most definitely return to FIU for my second degree.

Congratulations, Natania! We are proud!